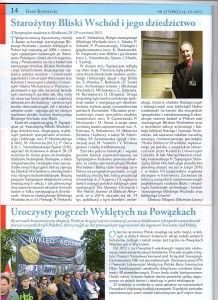 Zachęcamy do lektury. To ważna wyniki!

Finds include remains of what may be a governor’s residence.

An archaeological team has uncovered remains of what may have been an administrative center during the period when Judahite kings ruled out of ancient Jerusalem.

Led by project director Avraham Faust, an archaeologist with Bar-Ilan University near Tel Aviv, Israel, excavations at the site of Tel ‚Eton located on the edge of the fertile Shephelah and the Hebron hill country to its east have revealed structures, artifacts, and fortifications that tell of an ancient city that historically straddled the eastern edge of the lowlands between the biblical kingdom of Judah and Jerusalem in the east and the cities of the Philistines on the Mediterranean coastal plains of the west.

Among the finds was a large, 240 sq.m. 8th century BCE house structure built following a four-room plan typical of ancient Israelite dwellings, featuring high-quality construction and, with its location at the highest point on the mound, commanding a strategic view of all areas below. The ancient building, along with its town context, was strategically located at the cross-roads of important north-south and east-west routes, set above fertile agricultural country.

„The structure was excavated, almost in its entirety, and was composed of a large courtyard with rooms on three sides,” stated Faust. „The building was nicely executed, including ashlar stones in the corners and openings. Hundreds of artifacts were unearthed within the debris, including a wide range of pottery vessels, loom weights, many metal objects, botanical remains, as well as many arrowheads, evidence of the battle which accompanied the conquest of the site by the Assyrians.”

Near the end of the 8th century, in 701 BCE according to biblical and Assyrian records, invading armies under the Assyrian king Sennacherib destroyed cities and towns throughout the Kingdom of Judah, sparing Jerusalem but utterly devastating the settlements of the Shephelah region, on the eastern edge of which Tel ‚Eton is located.

Faust and his colleagues suggest that the building may have been the residence of a Judean governor, responsible for administering a region under its control under the Judahite kingdom centered in Jerusalem.

Tel ‚Eton has also been identified with a more ancient Canaanite city known as Biblical Eglon (Josh 10:34-36; 15:39), and Faust’s team has uncovered evidence of occupation dating as far back as the third millennium BCE (the Early Bronze Age).

„Remains from this period were unearthed in practically every square in the section in which we dug deep enough,” stated Faust, „and in-situ (left in-place by the early inhabitants) vessels were discovered even down the slopes, signifying that the town was large.”

The Late Bronze Age is well documented in Egyptian sources, such as the el Amarna letters, which are mostly diplomatic correspondence on clay tablets that have provided an historical accounting of the affairs, especially as they relate to Egyptian/Canaanite relations, during the Egyptian New Kingdom.

In addition, Faust’s team has uncovered a destruction layer dated to the Late Bronze Age town.

„The evidence regarding the end of the Late Bronze Age town hints that it was destroyed, probably in the 1st half of the 12th century BCE,” stated Faust in a recent report. „This was part of a wider wave of destructions throughout the region. The causes of the destruction are not clear, [but] various suggestions were raised regarding the identity of the responsible party, including the Israelites, the Philistines and the Egyptians.”

We are pleased to announce the latest addition to the online Corpus of Mesopotamian Anti-witchcraft Rituals: http://www.ccmawr.altorientalistik.uni-wuerzburg.de/ccmawr/ .

You can search the CCMAwR catalogue for tablets when you are looking for respectively: 1) information on a specific tablet; 2) a group of tablets (e.g., all anti-witchcraft tablets from a certain provenance or period); or 3) a tablet that was copied in a certain publication.

The resulting page will give you information on the tablet’s format, the language, script and period it was written in, and its archival context (if known). Links to CDLI and/or HPM are provided when available. Moreover, Schwemer’s cuneiform copies can be accessed. If the tablet is edited in CMAwR vol. 1 or 2, links to information on the relevant composition(s) on CCMAwR and to their digital edition on Oracc (vol. 1) are given as well.

JERUSALEM — At first glance, the ancient Babylonian tablets on exhibit for the first time at a Jerusalem museum look like nothing more than pockmarked lumps of clay.

But the 2,500-year-old treasures from present-day Iraq have become part of a thorny archaeological debate over how to handle historically significant relics thought to have been dug up in the fog of war by Mideast antiquities robbers.

Experts in cuneiform writing, one of the world’s earliest scripts, say the collection of 110 cracker-sized clay tablets provides the earliest written evidence of the Biblical exile of the Judeans in what is now southern Iraq, offering new insight into a formative period of early Judaism.

The tablets, though, also tell a murkier story, from the present era, according to scholars familiar with the antiquities trade — a story of the chaos in Iraq and Syria that has led to rampant pilfering of rich archaeological heritage and a rush of cuneiform tablets on the international antiquities’ market.

The collector who owns the tablets on display this month at the Bible Lands Museum Jerusalem, insists they were purchased legally, decades before that looting began. However, an ancient history scholar familiar with the artifacts disputes that.

Leading U.S. museums have pledged not to exhibit unprovenanced artifacts that have surfaced in recent decades, as part of an effort over the last decade to discourage illicit antiquities trafficking. But cuneiform inscriptions have emerged as a notable exception, with some arguing these relics would be lost to history if they did not make it into scholarly hands.

„We are not interested in anything that is illegally acquired or sneaked out,” said Amanda Weiss, director of the Bible Lands Museum Jerusalem.

„But it is the role of a museum to protect these pieces,” she added. „It’s what we are here for.”

The plundering of antiquities in the war-torn Middle East has become a primary concern for the archaeological community, and some archaeologists even compare satellite images of sites in Iraq and Syria to moonscapes, after antiquities robbers went through them.

Archaeologists claim the Islamic State extremists and militants from other groups are funding their activities in part through illegal trafficking of antiquities, and authorities worldwide have been taking action to try to stem the flow.

What first sparked awareness of the issue, archaeologists say, was a deluge of cuneiform artifacts on the Western antiquities markets after the first Gulf War in 1991.

In the years that followed, archaeologists estimate that hundreds of thousands of small clay tablets with cuneiform inscriptions made their way into the hands of dealers. Many contained incrustations, indicating they were „fresh out of the earth,” said Robert Englund of the Cuneiform Digital Library Initiative.

An American scholar of ancient Jewish history familiar with the tablets on display in Jerusalem said they were purchased on the London antiquities market at the time when cuneiform artifacts were flooding the market, a strong indication that the items were looted. He spoke on condition of anonymity to discuss a potentially illegal activity.

Sofer said a few tablets from the collection were displayed in a New York museum and a Los Angeles museum in 2013, and their import and export in the U.S. was properly reported to U.S. authorities. He would not name the two museums, or the person who sold them to him.

„These things would be lost, and wouldn’t be recognized for what they are” if he hadn’t bought them, Sofer said.

As common as cuneiform tablets are, few have been as celebrated as those on display in Jerusalem.

The tablets fill in a 130-year gap in the history of the Judeans exiled to Babylon after the Babylonian destruction of Jerusalem in the 6th century B.C., said Laurie Pearce, a cuneiform expert from the University of California, Berkeley.

The earliest of the tablets, which have dates inscribed on them, is from just 15 years after the destruction of the First Jewish Temple in Jerusalem, and the inscription suggests the displaced Judeans were more quickly absorbed into the Babylonian society than previously thought, said Pearce, who studied the collection.

The tablets include administrative documents such as land agreements, showing the Judeans were „integrated almost immediately,” she added.

The topic of cuneiform artifacts still roils the archaeological community.

The American Schools of Oriental Research, an academic research association, bans scholars from publishing articles on artifacts illegally excavated or exported from their country of origin after 1970, when the U.N. adopted its policy against antiquities trafficking.

But in 2004, the association made an exception, allowing publications about cuneiform artifacts that have no record of how they were unearthed — under the condition that Iraqi antiquities authorities give their consent and that the artifacts are eventually returned to Iraq.

The exception was made because the esoteric wedge script writings are so valuable to historical study, said Eric Meyers of the association.

The policy is now again a point of contention in the field. Over the past year, scholars at the association have debated changing the policy again, with most experts leaning against publishing articles on cuneiform artifacts as these objects continue to hit the markets, Meyers said.